The ever popular West Midlands Open attracted  a strong entry from Veterans around the country including  our own Caryl Oliver, Adrian Griffin and Malcolm Allton.

Adrian fenced his newest weapon, Sabre and fenced well in a strong field.  He came 8th, losing  his D/E bout to the eventual bronze medallist.

In the Men’s Epee, Malcolm fenced well in the pools to earn 8th seed position.  He ended up in  13th position having also come up against an eventual bronze  medallist in the D/E.

In the Women’s Epee, Caryl fenced well in the pools and earned No 1 seeding going into the D/E  where she moved through to the final comfortably but not  easily!  The only bout she lost for the whole day was  in the final against Marg Oniye and so came home with a  silver medal. 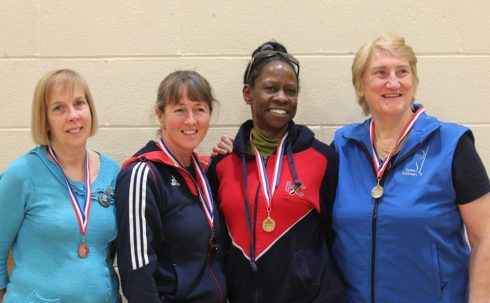 Book a Place at a Session

Book a place at a session

Club has restarted after Christmas

There is a shortage of Sabre fencers at our club at the moment, and we’d like to try to address that by building some critical mass of regular attendees so it’s worthwhile coming to fence Sabre. We have a group messaging system to help Sabreurs coordinate their attendance. Please get in touch if you’d like […]

The next fencing session will be on 7th January 2022. On behalf of everyone at OFC, I hope that you have a restful holiday.

Last club session of the year

Our last guaranteed Friday session of 2021 is on the 10th December 2021, but we do have the option of using the hall on the 17th. Please could you let us know if you’d like to fence on this evening so that we can decide whether the session is worth running?

We will be holding a beginners course, starting on Friday 8th October for 8 weeks. Tickets will be available for purchase on the club admin site at 10am on Wednesday 29th September. Since we’ve not run a course for nearly two years, we expect that there will be high demand for places. If you’re not […]